To Be or Not To Be a Scientist: A Newly Minted Biochemistry PhD Weighs In An interview with Dr. Sheena Menezes. 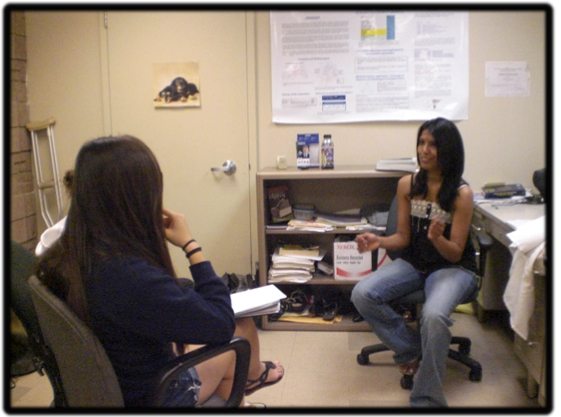 Editors’ Note: The following is based on excerpts from an interview with Dr. Sheena Menezes (SM) conducted in the UCSB Chemistry Building on March 17, 2011.

Sheena Menezes is a recent graduate of the doctoral program in the Department of Chemistry and Biochemistry at the University of California Santa Barbara.  Born and raised in Kuwait and of Indian descent, she came to the U.S. to attend college, receiving her BS in computer science at the University of North Texas. Sheena currently works as a research scientist at  a personalized healthcare biotech company in Palo Alto, California.

Where did you grow up?

SM: I am Indian but I was born in Kuwait.  My family is from a state called Goa in India. In 2000, after high school in Kuwait, I came to Texas, where I did my undergrad at the University of North Texas.  Then I went to California for my PhD at UCSB.

Growing up, did you ever imagine that you were going to pursue science? Did you have any childhood influences that sparked your affinity for science?

SM: I always liked science and was good at it in school. I was intrigued by genetics and learned at a young age that migraines are strongly hereditary, especially from mother to daughter. I wanted to understand more on these subjects so I could help people someday.

My sister, who has a PhD in biochemistry also, was a very big influence because she would always discuss science topics with me. My parents were very supportive too. They taught me that anything is possible—if you really like something and you put your mind to it. Those core values were already set, so if I wanted something, I felt I could work really hard to get it.

Did you ever become frustrated with or want to change your college major or your area of specialization in grad school?

SM: I majored in computer science because it was natural to me. I took computer science in high school and got good grades, which encouraged me to major it in college. I was also advised that computer science is a really good field because after your bachelor’s you are guaranteed a good job. It was a safe route to get into.

Towards my third year of undergrad, however, I remember telling myself: “I do not really see myself programming on a daily basis.” I’m the kind of person who likes experimenting with nature. I also considered at that time the possibility of doing interdisciplinary studies, something which combine computer science and biology. It was really important to me to study something that interests me. And that’s where I am today.

Why did you choose UCSB for your graduate studies?

SM: Everybody told me I would like UC Santa Barbara because everybody is very laid back. It’s demanding, of course, but in spite of being stressed out, you can always take a walk on the beach, so it always had that extra perk. And UCSB has a great interdisciplinary program with their bioengineering. They really support interdisciplinary research there, too, so you can get a taste of engineering, biology, et cetera. So I thought, “Perfect, I can use the computer science that I learned and try to apply it to biology.”

What would you say are the most desirable traits—in terms of either personality or intellectually—a person should have to become a successful scientist?


SM: Personality: humility and confidence together. Intellectual: a desire to keep learning and keep up with current literature.

Can you explain your doctoral research?

SM: Sure. Genomic information for different organisms have been sequenced and stored in computer databases such as NCBI. I queried the STRING database and discovered a protein sequence, which was listed as an unknown. I looked through various articles and confirmed that there was not much information about this protein.

Using advanced BLAST Searches, we predicted that this new protein was a tRNA methylase. To validate what I predicted, I did experimental work where I cloned the gene—that basically entails taking the piece of DNA that codes the unknown protein from one organism and putting it into bacteria. Taking advantage of bacteria’s fast growth rate, I was able to make a large quantity of this new protein. After I made the protein, I designed and performed experiments to test the function.  I validated my computational prediction using experimental methods. Some of the experimental methods included 2D thin-layer chromatography, LC-MS/MS, RNA methylation assays, and others.

What was the most difficult aspect of the PhD program in biochemistry?

What was the intellectual atmosphere of your department at UCSB like? Were people supportive? Whom did you look to for advice or guidance?

SM: My advisors offered a lot of support. What I respect about them is that they took me in the lab knowing I did not have a huge breadth of biochemistry skills. However, they really valued the computational aspect, and wanted to utilize that in their research. My advisors were brilliant and were definitely influential in giving me good advice.

How does graduate school differ from undergraduate?

SM: Working on your own requires a lot of discipline. So you can’t procrastinate. As an undergraduate, you have a more structured schedule than in graduate schol. In grad school, I had to set my own deadlines sometimes, as I work more efficiently that way. Organizing priorities can get quite overwhelming at times, to be honest. But setting deadlines and priorities helps.

Another tip I would like to share is: know yourself. For example, I am not the best morning person, so 7am studying—I can’t do that! I know I am very productive from 6–11pm. So I would keep something very important, or very tedious, to do in that timeframe.

What do you do on a day-to-day basis as a researcher?

SM: My current position is an assay development scientist at a healthcare startup. I have the expertise to discover novel bio-markers for different diseases. An average day would be planning or performing the set of experiments that I need to accomplish taking into account both short-term and long-term goals. During experiment wait-times, I continue reading literature and updating lab notebooks.

What are your interests outside of your studies in the lab?

SM: None! [Laughs.] No, no, no. I love to dance—salsa, swing, middle-eastern dance. To be honest, I would love to be a DJ! Mixing music, finding the house version with some hip-hop and some Spanish!

Do you have any final advice or recommendations to students who are undecided about whether to pursue science in their academic or career futures?

SM: If possible, try to take or audit classes in different fields of interest to get a basic understanding of a variety of subjects. Talk to your professors to get involved in research opportunities or lab work. You may end up in a totally unrelated discipline from where you started, but the experience is invaluable to your success in both undergraduate and, more so, graduate school.