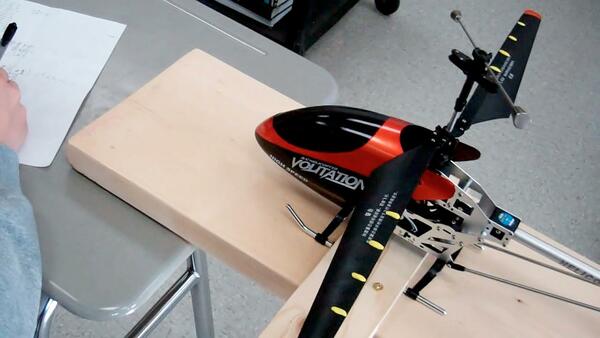 We recently spoke with Sam Weitzman, a JEI author and a former student at King Philip Regional High School (Wrentham, MA) about his unique set of experiments using biomimicry, or emulation of a natural process or characteristic, to increase the lift generated by helicopter blades. His data suggested that by applying specific numbers of bumps found on whale tails – called tubercles – to helicopter blades, the blades could be made more efficient when spun. Sam was the first author of ‘More Efficient Helicopter Blades Based on Whale Tubercles’, which was published on December 22, 2013. He is now a first-year student at Brown University.

I’ve always as a kid liked science and math. I really can’t remember a time when I didn’t like science and math. Around 7th grade I really started getting interested in it, and I realized I’d want to go into a science field for a profession.

What was the inspiration behind your project and how did you get started?

This project was the result of a ‘Research in Science’ class, taught by my mentor for the project, Mrs. Ann Lambert. Originally, I took the class just as an elective because was interested in science and thought it would be cool to start a project. Mrs. Lambert had us research different ideas, and one of the activities she had us do was find examples of biomimicry research that’s already been done, and that’s when I came across the idea of whale tubercles, studied by Dr. Frank Fish. So that was the inspiration behind my project and later I incorporated that into my own project.

What motivated you to experiment with tubercles specifically on helicopter blades?

To be honest, helicopter blades were one of the first ideas that I thought of. Also, it was something that I realized I would be able to do in the classroom setting. The idea of putting tubercles on a blade spinning through a medium was something that I could definitely do, and I could easily buy a R/C helicopter and keep it in the classroom. It really wouldn’t require any extra materials that were too fancy or expensive. We chose a medium-sized helicopter about two feet long, and the total cost of materials was less than $100.

One other blade type that I was considering was a computer fan, but I felt that computer fans might be a little too difficult, and too small.

Take us through the timeline of your project. Did you have any specific strategies that you found helpful in writing your manuscript?

Throughout the class, Mrs. Lambert had us write up different parts of our projects as ‘checkpoints’. So throughout the year, once every few weeks depending on the time of year, we’d have a checkpoint. One of the first things I did was write my introduction and methods sections, and I put all those pieces aside so that when it came time to write the final paper after my experiments, I only had to compile the parts that I had previously worked on throughout the year.

In total, I probably went through five or six rounds of edits with JEI after submitting. I first submitted in May of my junior year and the article was finally published December of my senior year. It took about five months. But a lot of those five months were not spent every day or week going back and forth. The exchange happened every few weeks to once a month, in small chunks.

What do you think was the most rewarding part of your project?

The most rewarding moment was definitely when I got the email telling me that the manuscript would be published in the next issue. There was nothing better than that – it meant my work was done, and the manuscript was finally complete. It had been what I was working on for months, so I was really happy when I got that email.

It was also a really good feeling every time I submitted a new edit. I put a lot of work into each edit and with each edit the paper just got better and better and better. You could see that. And also getting suggestions and comments and reviews back was also pretty fun. It was cool, and also very interesting to see what I could do better. There were so many things in the manuscript that I looked over and missed that JEI saw and suggested I fix.

Did you ever find writing a manuscript to be particularly challenging or push you to your limits?

It was daunting when I first looked at reviews I received from JEI – just pages and pages of little side notes in all different colors [on the Word document]. But I would go through and first deal with the things I could fix quickly, just little quick one sentence or two sentence edits – move a paragraph here or add a sentence there – and that actually cut down the list so that it was intimidating. Afterwards, I’d go through the more challenging edits and it wasn’t as daunting. The thought of getting a published paper really helped me push it through.

What was the biggest impediment you faced while preparing your work for publication?

Statistics. I really hadn’t done any work with statistics before, so when the JEI reviews came back requesting that I add statistics, I really didn’t know what to do. I was really lost and didn’t have any idea how to do it. So it took me until I got back to school and asked the statistics teacher for help that he explained it to me. From there, it was easier than I thought it would be.

What would be the next steps in your experiments?

Further research would probably take me a to a bigger scale than a two foot helicopter. With better materials, I could construct tubercles that are lighter and more consistent. I could run a lot more trials with different types of blades, with greater or fewer tubercles on the blades. I could explore tubercle size, spacing, things like that. There are a lot of variables about the tubercles that I didn’t have the time to test, like the height, the size, the numbers, and the spacing.

The implications are that if this holds up on a larger scale, tubercles could allow actual helicopters to be more efficient and save fuel, and reduce carbon emissions.

What is the next step for you?

Do you think working with JEI has helped you prepare for college?

Absolutely. Even in college interviews, I’d always bring up the most recent draft of the manuscript and hand it to my interviewer. It was definitely a good conversation starter and something to talk about that was unique from conversation that might come up with other candidates. I think it really proves that you’re interested in science and that you really do want to do research. Rather than passively sitting in class, you’ve shown that you’re an active scientist.

Do you have any advice for students thinking about submitting to JEI or pursuing science in general?

It’s easier than you might think it is. All you have to do is keep on pushing through it if a task is just a little too big – just take it one step at a time and it becomes more manageable. Don’t be afraid to ask others for help either. I had a lot of people help me on my project. That was extremely useful, and I probably wouldn’t have been able to do it without all the help that I got.