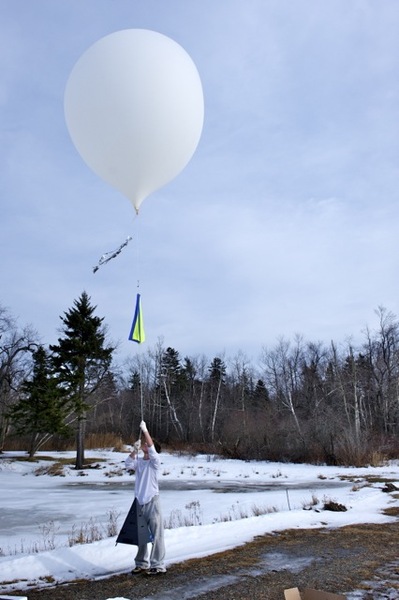 As a sophomore in high school, Sam Levine from Shrewsbury, Massachusetts, designed and built a reusable science experimentation platform that can steadily fly 20 miles up into the earth’s atmosphere, in order to enable scientists to conduct a variety of different experiments at high altitudes. Called the Near Space Experimentation Platform (NSEP), the device is equipped with a five-foot-tall helium weather balloon that supports its flight, dual redundant Global Positioning Systems (GPS) for tracking its movement and location in the sky, a “cut-down” system made from nichrome wires (commonly found in toasters) to separate it from the balloon during flight termination, and a parachute that will allow the platform to safely return to the ground. Most importantly, the NSEP is a pyramid-shaped container with a programmable door, which allows it to carry and expose any small experiment to high altitude environments at pre-programmed times.  With this platform, Sam competed and won first place at the 2011 Massachusetts Science and Engineering Fair. JEI recently caught up with Sam, now a high school senior, by email, and learned a bit about his experience with working on NSEP, as well as his current projects, goals and aspirations.

Sam started working on NSEP thanks to a course he took offered by his high school, called Research Methods in Chemistry and Physics. Designed to introduce students to independent science research, this course exposed Sam to a variety of research topics in the physical sciences and engineering. Sam became interested in flying objects into the near space after learning about Project Icarus, an MIT group who, in 2009, launched a digital camera into the stratosphere (17.5 miles, or 98,000 feet up in the sky) and took a picture of the curvature of the earth, all with a budget of only $150. Nevertheless, Sam noticed that while “many other scientists have done similar projects… there was never a consistent, repeatable, and affordable device created. Instead each project was a ‘one-off design’ based on the materials that particular scientist had in hand.”

Because of this lack of consistency, Sam was inspired to design and build NSEP, so that there will be a “standardized, ready-to-use, reusable, and affordable device” available for any scientist who wish to conduct experiments at near space altitudes. Sam intended NSEP to become a platform that “could be programmed and flown within an hour of arrival at a laboratory, and adapted to whatever needs [a] particular scientist might have.” For example, Sam suggested that “a physicist might choose [to use NSEP] to fly a cosmic ray detection device [into the stratosphere], whereas a biologist might fly packets of various seeds or bacterial colonies to test the effect of high altitude radiation [on plant or bacterial growth].”

Sam began working on NSEP in June of 2010, the summer after his freshman year of high school. He constructed the project at home in his parents’ basement, where he set up a “makeshift workshop,” completed with an area specifically for laminating the carbon fiber used in building the structural elements of the device. Because engineering is not a field typically covered in high school science, Sam had to research and learn a lot of the background materials himself. He credited the mentorship of his father Steve Levine, his two science teachers, Dr. Derric Lowery and Peter Collins, as well as many kind engineering experts, as critical and invaluable throughout the project.

Before building the device, Sam drafted blueprints of his designs. In fact, he “went through several iterations of different designs on paper to determine the best possible design” before settling on the final model, which consisted of a carbon fiber sub-structure enclosed by a carbon fiber laminated skin. Sam also had to gather the materials for constructing his device. To do so, he contacted several engineering companies, who donated many necessary components, including carbon fiber and GPS units. An engineering company, BIPOM Electronics, further assisted by helping Sam with the design of the electronic “brain” which operated the doors and cut-down relays of the device, and writing the computer software used to run the system.

Preparing the carbon fiber sub-structures to accept the exterior skin.

Sam then constructed three identical models, or prototypes, of the device. Building multiple prototypes was important because, in Sam’s words, “this not only documented the repeatability of the system, but also provided back up in the event that any were lost during flight testing.” During the construction process, Sam had to run calculations and tests to ensure the different components of the NSEP are performing as designed. One of the tests he conducted was for the electronics associated with the platform. In Sam’s design, the electronic components operate a set of relays that drive the nichrome cut-down mechanism used to sever the balloon from the platform in order for the platform to descend from the sky. The electronics are also responsible for deploying the parachute, operating a set of audible locator beacons, and powering the GPS locating system, all of which are critical for safely landing the platform.

The three completed prototypes waiting for the installation of electronics.


To test whether the electronics were functioning properly, Sam assembled the device and hung it from a tree in the backyard for the initial trials. After several successful runs, Sam then, as he described, “ran two full scale tests sending the device up on a helium-filled weather balloon secured by a 1000-foot tether, and photographed the full course of the test, including the cutting down of the device and safe landing.”

Sam worked on the project throughout the summer and fall. During this time, he overcame many anticipated as well as unanticipated challenges. One anticipated challenge was that the device must be in compliance with the Federal Aviation Administration (FAA) guidelines. The FAA requires that all objects launched into the sky, including weather balloons, must have multiple, redundant mechanisms for ending the flight, so that aircrafts potentially flying across the same space can be protected from accidental collision. To comply with this regulation, Sam built two nichrome cut-down systems, and designed each part to be independently functioning. At a pre-programmed time set in the on-board computer, a relay is closed allowing electrical current to run from an on-board set of batteries, to a small piece of nichrome wire wrapped around the balloon attachment cord. The high resistance of nichrome causes it to rapidly heat up, burning the cord off, and releasing the balloon. With the built-in redundant circuits, this means that each cut-down mechanism operates independently, so that if the first fails to detach the balloon, the second will likely complete the task.

Loading the electronic components for the first test flights.


Another anticipated challenge was the tracking of the device during its flight and its retrieval after landing. Successful tracking and retrieval is important for the NSEP because the scientists who send experiments up with the platform may need to know the precise altitude and distance their samples traveled, and may also want to collect the samples and data that came down after the flight. Sam therefore had to make sure he could precisely locate the device during the flight and after landing. To do so, he included two functionally redundant GPS units as a fail-safe

Because it is difficult to control the precise location where the device will land, it is possible that the device, together with its parachute, will get caught in a tree during landing. To solve this problem, Sam engineered a third cut-down system that is programmed to sever the chord between the device and its parachute four hours after launch. With this system, Sam proposed, “In the event that the parachute was caught in a tree, the researcher merely has to locate the device using the on-board GPS system, and wait until the four hour mark at which time [the device] would cut itself loose and drop to the ground.”

One challenge that Sam did not anticipate, however, occurred during the physical assembly of the device. Sam had constructed the original structural component of the NSEP using a foam material typically found in model airplanes. Unfortunately, when Sam attempted to use a recommended epoxy resin to laminate this foam structure with an outer carbon fiber skin, the material melted from the process. As a result, Sam had to search for a different material to be used for building the structure.

Getting ready to launch the free flight test in the Berkshires of Massachusetts.


After six months of background research, design work, construction, trials-and-errors and preliminary testing, Sam was finally ready to test his device in a free, un-tethered flight. On New Year’s Day 2011, the NSEP was launched from the Berkshires in Western Massachusetts. The device flew across the state, and ultimately landed sixty miles away in Leominster, Massachusetts.

The test was a success! Sam was able to track the flight path of the device with the redundant GPS, and locate the device after it landed. Sam described the experience of this successful test as the most rewarding part of the research project:

“I suppose that nothing could top the feeling of watching the system actually launch into ‘near space’ on that New Years Day. The excitement of seeing it come to fruition was balanced with the understandable apprehension as to what might happen if it were lost.  Of course nothing topped the sigh of relief when we drove across the state and found the device within minutes as it signaled its position.”

The view from "near space," during the January 1st free flight.

The successful free-flight test did not mean the end of the research project for Sam. Rather, it was only the beginning. After winning the state science and engineering fair, Sam has continued to work to improve the NSEP. For example, he learned from the free-flight test that the camera lens attached to the device could fog up as the device passed through the atmosphere, so he would have to alter this component in future designs. Also, he learned that he needed to reinforce the connection between the GPS and their battery packs. Furthermore, Sam plans to lower the power consumption of the device by reducing the size of the on-board computer, and optimize the mechanism that operates the programmable door on the platform.

Sam has also ventured onto other research areas. Inspired by the people he met at the state science fair, he compiled and recently published a two-volume set of independent research project proposals by high school students who successfully competed in local and state science fairs. His goal, as he described, “was to help other students think of science projects they can do and show them what successful projects look like when they are completed.” He also spent his summer taking college courses at Harvard Summer School, including a course in Biomedical Engineering taught by Dr. Sujata Bhatia, and this has inspired him to focus on a major within this growing field.  By studying Biomedical Engineering, Sam hopes “to be able to affect the lives of millions of people through the development of exciting devices and techniques.”

Lastly, Sam was asked what advice he might have for fellow high school aged emerging scientists. His response:  “The best advice I have is not to be afraid to try that which has never been done before.  Failure is just another step on the pathway to success. Avoid feeling that you have to know everything, because you don’t. Great inventors and scientists aren’t those who know all there is to know, but rather are people willing to reach out to others and collaborate towards a common goal.”