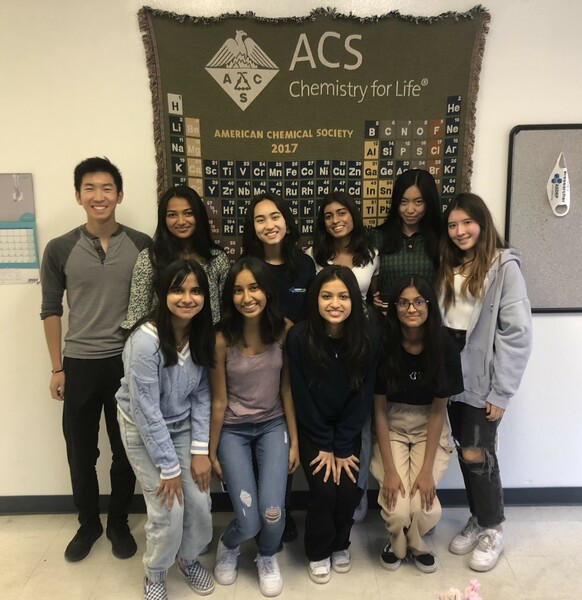 This is the first time a manuscript with more than one student author has been selected as an Editor’s Choice pick! Each author contributed to the experiments and writing of the manuscript. While we commonly see submissions with just one or two authors, manuscripts with a larger number of authors tend to be more common. This reflects the notion that science is collaborative and expertise in different areas may be needed to present a more complete story for publication.

We asked the authors to tell us why they were interested in the specific topic examined in this manuscript. Read what they have to say below:

Our lab has been interested in the interface of chemical biology and organic synthesis, and specifically in small molecules inspired by natural products. In our exploration of neuroactive small molecules we came across rivastigmine, a synthetic therapeutic that inhibits cholinesterases in an analogous manner to physostigmine, its natural product counterpart. We noticed that physostigmine had an N-methyl carbamate, whereas rivastigmine had an N-ethyl-N-methylcarbamate, and we were curious to know what effect this might have had on reactivity. So that is how this project started, and the rest came together like clockwork.

The authors are all affiliated with the Aspiring Scholars Directed Research Program (ASDRP). ASDRP is a nonprofit private research institution in the Bay Area of California. It was started several years ago with the simple goal of getting high school students involved in cutting edge scientific research. Today, with over five hundred research students led by a team of over twenty scientists and engineers in every field imaginable from small molecule drug discovery to machine learning and AI, ASDRP has grown to an institution that we hope is changing the way in which high school students think about science.

Learn More About the Research

Acetylcholine (ACh) is broken down by the enzyme acteylcholinesterase (AChE). This process can be inhibited by compounds that block the active site in AChE. One such compound that can inhibit AChE is rivastigmine. Rivastigmine is an alkaloid, or a compound that contains at least one nitrogen atom. The authors of this manuscript were interested in looking at the inhibitory effects of rivastigmine and four analogs on AChE activity.

They took three different, but related experimental approaches to answer this question. First they wanted to see if they could synthesize rivastigmine and the analogs without the use of sodium hydride which can be difficult and dangerous to handle. They were successful in achieving the synthesis of rivastigmine and analogs. Next, they turned to computational modeling to look at the predicted interactions between each compound and the active site of AChE. This type of modeling can be useful when screening large numbers of compounds to determine which ones should be used in follow-up assays. The last experiment the authors did was to look at AChE activity in a biological assay to test which compound had the highest level of inhibition.

Ultimately it was found that physostigmine showed the best inhibition of all the compounds tested. In the future the authors plan to look more into the stereochemistry of each compound and determine how that might affect the ability of each to inhibit AChE activity. They are also interested in looking further into the selectivity of the compounds, that is do they only inhibit AChE or might they be able to inhibit other enzymes with similar active sites or substrates?

Check out the full manuscript to learn more and see why this manuscript was selected as an Editor’s Choice manuscript.

The material on this page was prepared by Kari Mattison, JEI Editor in Chief. The authors provided the photo and information about the research lab and ASDRP. Material was edited lightly prior to posting.