The Author's Take: Manasa Pagadala Author of "Determining the Effect of Chemical and Physical Pretreatments on the Yield and Energy Output of Cellulosic Ethanol from Panicum Virgatum" 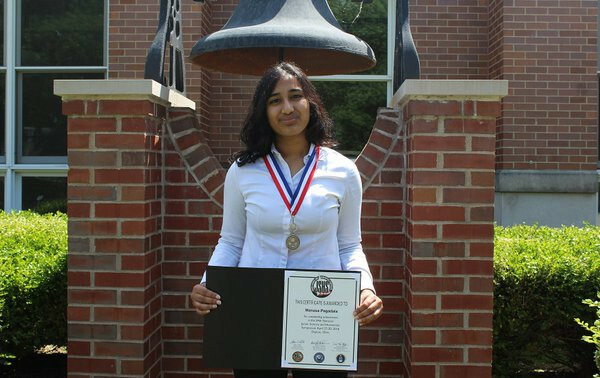 Manasa Pagadala, a student at Rivermont Collegiate in Bettendorf, IA, studied the creation of ethanol from switchgrass, a type of grass native to the Midwestern United States. Her research is relevant to creating climate-friendly biofuels. Her research has been presented at the Intel ISEF and National JSHS.

Manasa is the first author of the paper “Determining the Effect of Chemical and Physical Pretreatments on the Yield and Energy Output of Cellulosic Ethanol from Panicum Virgatum,” which was published on October 10, 2016. The work was supervised by and published with her mentor Helen Keys.

You use a lot of statistics in your paper. Can you describe how you learned about statistics and why you chose the statistical tests you did?

I first learned about statistics when I submitted my project to a research symposium called JSHS. The coordinator explained to me that various statistical tests were needed to prove the validity of my analyses. I had the data available and asked my math teacher to teach me about statistical tests for the groups of variables I was looking at. I exclusively employed T-tests to conduct my analysis; by determining a p- value that was less than 0.05, I was able to reject the null hypothesis and indicate a statistically reliable mean difference between the results of tests.

What do you see as the advantages and disadvantages of ethanol combustion as a source of energy as compared to other forms of clean or renewable energy?

Of the leading energy alternatives to fossil fuels, biomass is the most cost-effective and practical and therefore offers the most realistic and sustainable strategy. Solar and wind offer the advantage of zero fuel cost, but they have higher capital costs and much lower utilization rates because solar only produces electricity when it is sunny and wind when it is windy. The combination of high capital costs and low utilization lead to high electricity prices. Because of variability in weather conditions, solar and wind energy cannot be used as base power and are largely utilized in sophisticated grids where there are back up natural gas power plants that can take up to load on cloudy or windless days. Ethanol plants operate 24 hours a day and are used as base power.

Ethanol is already in the form of fuel and can be used as a substitution for gasoline and other fossil fuels. Since the world and its machines are already adapted to a liquid fuel, using a substitute is a relatively seamless change. Cars, for example, would not have to be adapted to accommodate solar energy. Additionally, any plant containing sugar or starch can be used to produce bioethanol and the process is relatively simple. Therefore, plantations of energy crops will grow, increasing job opportunities in the agricultural sector which benefits the economy.

Biomass electricity is cost-effective and practical, and it offers a realistic and sustainable alternative to fossil fuels. Also, it is versatile and can be used to produce bio-methane to replace natural gas, liquid biofuels to replace gasoline and diesel fuel, and as feedstock to produce biochemicals and bioplastics.

Biofuel also has disadvantages, however. Biomass fuel costs money unlike the wind and the sun which are free. Agricultural fuel sources are seasonal and unavailable until the food crop is harvested. Occasionally, there are inconsistencies in feedstock based off of what a farmer wants to grow. Furthering biomass project financing is quite difficult without an indefinite source of fuel or feedstock at a known price.

Your research found that 15% potassium hydroxide solution had the best effects in pretreatment, but industry typically uses 30%. Would you recommend that industry consider decreases the concentration of potassium hydroxide in their processes or are there other experiments you would like to run first?

Before actually applying my results, I would definitely encourage completion of several more trials. Although I did receive relatively consistent results, another source should confirm my results before application to the industry. I would, however, recommend that the industry consider reduction of potassium hydroxide and other chemicals. Why waste resources and risk more danger to the environment when it could potentially be avoided?

If you were to continue working on this project in the future, where would you like to see it go?

My project originally focused on chemical pretreatment, using potassium hydroxide to pretreat my samples. I want to start looking into biological pretreatment, using microorganisms to break down the lignin. White rot fungi are able to degrade lignin whilst leaving the cellulose (the energy source) intact. Additionally, to hydrolyze cellulose, I used an enzyme called cellulase that was relatively expensive. On a large- scale, it dramatically increases the cost of ethanol production. Instead, I want to look into using the microorganisms in a cow’s rumen to break down cellulose. Unlike humans, cows can naturally break down cellulose (fiber) using their gut bacteria. Utilizing this function for ethanol production and completely excluding chemicals from the process would be beneficial for the ethanol industry and my next step.

How has this work impacted what you have decided to do personally and professionally since you started the project?

I had no idea what I wanted my career to involve before I started my project. After I started, however, I realized how intellectually stimulating research is and how much dedication I am willing to put into it. Even when I was not in the lab, I was constantly researching different facets of my research. At school or home, I would constantly daydream about how to advance my project. Any time I had free time, I would research more about the energy industry or rush to the lab to carry out more parts of the project. I loved the work I was doing. My future career involves solving the energy crisis or drug development research. This project helped me realize that I want to get a Ph.D. one day and start my own lab.

What advice would you give to high school, middle school, and younger students who are interested in science or research?

You don’t need a prestigious research university to be a part of a great project. Now, that doesn’t mean that formal laboratory research isn’t great. I’ve also done research under faculty mentors at universities and loved it. But don’t ever think that a great project is out of reach without a faculty mentor. Find what you love, target a real issue, create formal procedures, and put passion and dedication into it. It will show and you’ll definitely be successful.

My second piece of advice is to present at science fairs. Awards are great and all but just putting yourself out there to present and gaining relevant feedback from scientific experts is worth it. It has truly enhanced my presentation skills and made me a better researcher.

What led you to deciding to take on a research project in high school?

I’ve done science projects since sixth grade and once I reached high school, I wanted my project to be more formal. Since the energy crisis has become such a big issue, I knew I wanted to help remedy it in some way. I heard about the switchgrass biofuel production process from a television segment and decided to look into it.

You mentioned that you were interested in what you heard about making ethanol from wheatgrass and figured research would be a good way to burn time. How did you learn about this process? How did you decide what aspects of it you want to investigate?

After I heard about biofuel production, I learned about the process by looking through scientific literature. A lot of websites vaguely spoke about the process (biomass is “broken down”) so I actually had to contact experts who made ethanol every day. I called and e-mailed various ethanol plants and they gave me information about specific materials and procedures. I read tons of articles about the specific chemical processes. A recurring theme in all my references was that successful pretreatment was arguably the most important step in optimum ethanol yield. Unless the lignin is properly degraded, there is difficulty accessing cellulose. Therefore, I decided to target pretreatment and explored how specific conditions could efficiently produce ethanol. Additionally, a common complaint about ethanol production is that it is energy-intensive. Industry uses machinery that requires lots of energy. That’s why I also focused on eliminating extra energy and attempting the optimize the net energy output as much as possible.

Was there anybody who was particularly helpful or inspirational for you in this process?

My mentor, Helen Keys. I owe her so much. Honestly. She was willing to let me use the lab and showed me the ropes of research. At the time, I had no formal research experience and was a bumbling mess in the lab. After her guidance during the project, she helped me become comfortable in the lab, allowing me to carry this over to university research as well. Not only did she teach me about everything in the lab, but she was also willing to discuss parts of the project with me along the way. She was always there anytime I needed anything, came to science fairs with me, and is such a great mentor and friend. If there’s one person to thank for everything I’ve achieved, it’s her.