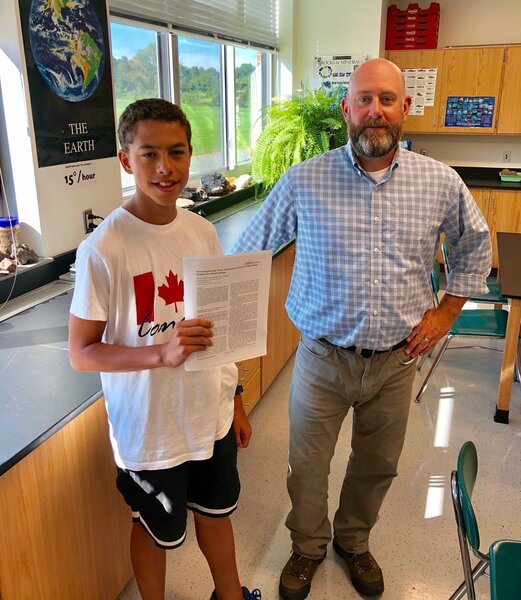 How do the temperature changes in Seattle and Rochester over the last century relate to the warming of the earth’s temperature as a whole? How would you predict this to affect the cities in the future?

ES: These cities are in very different geographical locations that have unique biomes. For example Seattle is in a Temperate Rainforest Biome and Rochester is in a Deciduous Forest Biome. This showed that despite having different climates, these cities still displayed evidence of a warming trend. In the very least this could point out warming on a continental scale. Seattle and Rochester could serve as two data points in a larger model. Given that my research looked at both the frequency of unusually warm years within a decade and overly warm decades in general; I feel that it's possible that with help I could see similar trends across the globe. Potentially scientists could then use the information to predict future warming.

Is climate change in these cities causing seasonal changes in temperature or periods of extreme temperature?

ES: Only time will tell, but my hypothesis is that we will see periods of extreme temperature and long term seasonal changes. If the temperature of the earth continues to rise I believe major storm events will become the new normal and the terrestrial biomes will change as the seasonal temperatures rise in particular places. For example, in Rochester this year we saw a couple of long-lasting heat waves in the summer. This brought warmer than average temperatures for most of July and parts of August and September. This caused Rochester, New York to experience one of the warmest summers of all time. This may not be a direct correlation to climate change but it is a good example of how climate change will impact the world in the future.

You chose to use Pearson Correlation Coefficients and slopes v time to analyze your data. Why did you choose these statistical tools?

ES: To be honest, I had no idea what these tools were. That’s what was so amazing about working with the Journal of Emerging Investigators. The editors and scientists showed me what I needed to learn and understand before my work was published. Even my parents had to look up Pearson’s Correlation Coefficients and I still think I know it better than they do now.

You mentioned the potential for historical error in temperature measurements. Can you speculate on causes of these errors and how they would affect our current interpretations regarding climate change?

ES: Well I watched a documentary called “BBC Climate Change by the Numbers” and learned about Matthew Fontain Mallory. He was a captain in the US Navy who worked to make sure people measured sea temperatures the same way. They used to use buckets made of different material like canvas and wood which caused inaccuracy. I have my own weather station and I could report to Weather Underground if I wanted to. I realized that where I placed it, it is affected by the wind. Other people could place it in places that introduce variables that affect temperature without realizing it. For example, it could be placed in direct sunlight. I would be worried about amateur data.

Does the Weather Underground collect any other weather data that could be useful for studying climate change?

ES: I’m currently studying precipitation, which they currently offer, and I’m specifically interested in snowfall right now. It’s too early to know for sure but my hypothesis is that I will see an increase in winter precipitation which will result in greater snowfall and rainfall. A lot of focus in the media is on the growing strength of hurricanes, but what about the costs of increased winter weather? The only problem is that this summer Weather Underground updated their site and took off most of the snowfall data. So I’m going to need to figure out how to get this information. Luckily, they still show overall precipitation and snow depth.

What made you decide to study this subject?

ES: I’ve been interested in weather since I was a little kid and originally just started measuring snow with a ruler. I’ve always liked keeping track of things that change and when I was older I learned about Weather Underground. After observing Rochester data over the decades I noticed some patterns and eventually decided to graph them.

What did you learn in the process of putting together and publishing your paper?

ES: Well, it’s very hard work and there was a lot for me to learn. I had to learn about analytical tools, how to use excel to manipulate data, how to format a research article and even how to improve my writing.

Has your research impacted what your plans are for the future?

ES: I think it has, because in the past I would go through phases where I was really interested in things for a limited amount of time. I thought weather would be one of these phases but after this experience I’ve continued to find joy in the study of weather. I think it also helped me understand what it means to think like a scientist. Even with this process taking over a year I’m still very interested in earth science and am looking at new avenues for research. I’ve also begun to select more difficult science courses in school and will have four AP science courses completed by the end of grade 10. I’m also hoping some day that I can arrange an internship at a place like NOAA.

Climate change is often a contentious political topic, how would you recommend science communicators and policy makers frame this kind of work?

ES: I think that people should frame it as “short term extremes affect long term temperatures” because people often say that “climate change isn’t affecting me so it must be false or something far in the future”. However, they don’t realize that it is affecting them in subtle but costly ways and if we showed them those subtle ways we may get more people to believe in climate change. You also don’t need to be in the path of more powerful hurricanes to feel the effects either. For example, if I were to discover that there was more freezing rain and snow during the winter, would that cause more damage to infrastructure or increase local taxes? Probably.

ES: Well, in addition to winter precipitation I’ve always been interested in learning more about how climate change has affected storms and the amount of moisture contained within them.

Do you have anything else you want to add?

ES: I can’t thank you enough for this opportunity and I hope you can continue to do the same thing for many other young students out there.