Editor’s Choice Pick: “Rubik’s cube: What separates the fastest solvers from the rest?” Read about one of our Editor’s Choice picks and the student author at the Journal of Emerging Investigators. 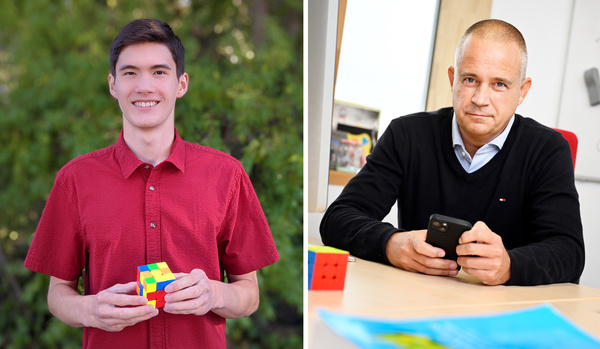 Kepler Boyce is a senior at Gunn High School in Palo Alto, California. Kepler got into speedcubing on a long family road trip in 2018 when he brought a couple of Rubik’s cubes to keep himself occupied. He was fascinated by the techniques used to optimize solving methods, and since then, he has continued practicing and gradually improving (and building his vast collection of twisty puzzles, which now numbers over 50).

Kepler started this project when he noticed his solve times plateauing for the 3x3x3 cube. His goal since he began speedcubing was to average under 10 seconds, but none of the advice on the internet about how to reach this goal was based on data. Thus, he was curious to see if advice from top-level speedcubers would be supported by quantitative solve data. He was fortunate to find Professor Kees Storm, Dean of the Department of Applied Physics at the Eindhoven University of Technology and a fellow speedcubing enthusiast, to mentor him. Outside of speedcubing, Kepler enjoys programming, robotics, and rock climbing. He hopes that this paper will help other speedcubers improve their solve times more efficiently.

Rubik’s cubes have 4.3x1019 (or 43 quintillion) possible solutions! Speedcubing is a competition where the goal is to solve a Rubik’s cube the fastest. The current record is 3.47 seconds, held by Yusheng Du since 2018. Most novice Rubik’s cube solvers are still figuring out their first move in this amount of time. In general, most speedcubers will start out learning a layer by layer technique to solve a Rubik’s cube and then progress to a method known as the Fridrich method.

After noticing his own solve times plateauing, Kepler set out to figure out, quantitatively, what would help decrease his solve times. Since most speedcubers follow the same or similar methods there must be other factors that contribute to solve time. Using video recordings of complete solves from speedcubers, Kepler analyzed several different factors and their relation to solve time. He saw that faster solve times were correlated with higher average turn rates, less pause time, and overall less regripping and rotation of the Rubik’s cube.

Kepler is interested in following up this study with looking at additional variables that may impact a speedcuber’s ability to have faster solve times. He has identified looking at the amount of time spent practicing, length participating in speedcubing and the physical characteristics of the speedcube being used as the top areas of interest for this work.

Check out the full manuscript to learn more about speedcubing and see why this manuscript was selected as an Editor’s Choice manuscript.

The material on this page was prepared by Kari Mattison, JEI Editor in Chief. Kepler Boyce provided the photo and personal biography which was edited lightly for clarity. Picture of Kepler’s mentor, Kees Storm, PhD was taken by Bart van Overbeeke.